In preparation for my WordCamp Orlando talk tomorrow entitled “The Next Generation Of WordPress Users” I conducted a small survey via Google Forms at a local public high school with approximately 40 students to see what they thought of Gutenberg (the version of Gutenberg was 4.2, which was tested with WordPress 5.0 Beta 2). A quick background on the students:

After Spending A Bit Of Time, Did You Understand The ‘Block’ Concept?

Were you able to do any of the following?

Overall, even though you spend a short period of time, what was your impression if you had to use this to write content for a website?

Any comments or feedback? 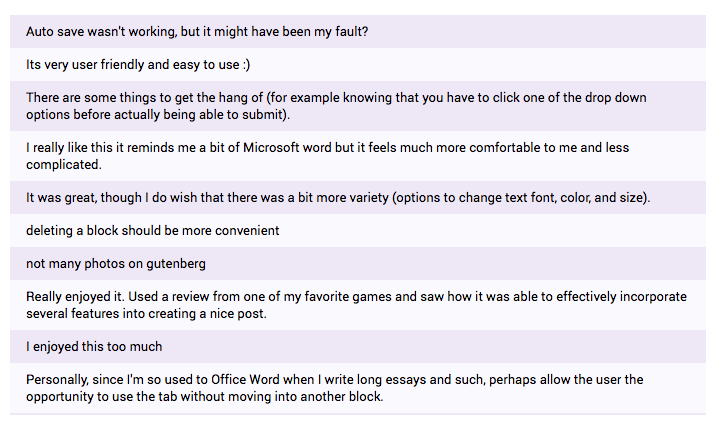 What’s Your Experience With WordPress?

Do you have a blog or your own personal website? If so, what powers it (or what runs it)?

What social media do you use (even if it’s not frequently)?

While there was some interesting and critical comments, overall it was a positive reaction to Gutenberg.

Is a sampling of 40 students from the same area a good sampling for Gutenberg? Not really, but this matches with my personal experience i’ve seen with Gutenberg over the past year. Those especially new to WordPress (young or old) or those younger even with a little bit of experience with WordPress tend to favor Gutenberg in a positive light. When I say younger I am counting Generation X and Y (anyone younger than 30, let’s say). I would contrast that to some reactions from Gutenberg online from the “older generation” or those who have been using WordPress for a long time.

My theory is that the young are more open to how Gutenberg works and change itself. But I thought these results were interesting – and I would like to see further study go into this regarding WordPress (and Gutenberg) towards the next generation of WordPress users.