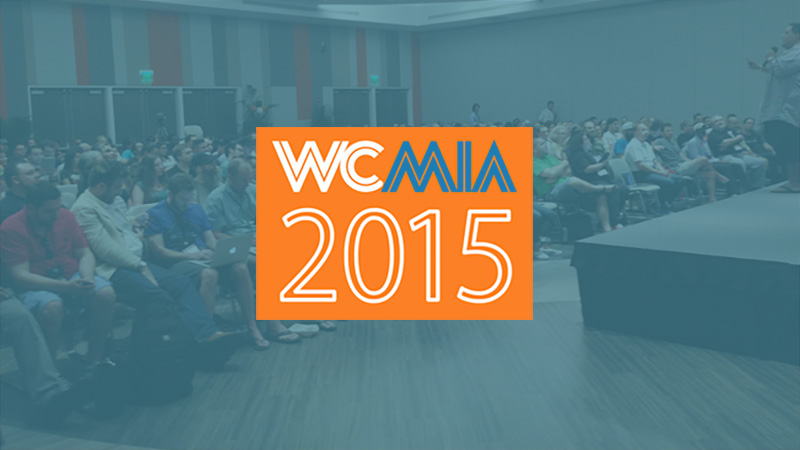 WordCamp Miami 2015 dates were announced officially yesterday, and it’s happening on May 29th-31st. As one of the organizers of WCMIA i’m planning on sharing my thoughts more about it’s organization, planning, and my general thoughts going forward. Although i’ve written a few blog posts on WordCamp organization in the past, I feel like maybe someone else might be able to learn from what we do right OR WRONG this year.

How Do You Top Last Year?

Sounds like a stupid question, but it’s one that you can catch yourself asking OR even get asked by others. I thought last year was our best one yet (it was certainly the largest, with our official attendee count about 770) but of course i’m biased. The HONEST response to that of course is that you don’t try – at least not directly. I personally don’t try to outdo myself or events, but constantly try to new things. I iterate things that seemed to have worked well. This helps WordCamp Miami to stay fresh and not be a carbon-copy of other events and conferences. I think anyone who runs a conference – especially a WordCamp – strives on some level to have a unique conference, even as that conference should be primarily focused on the local needs of the community.

Being unique doesn’t take much, and maybe I can write another post about my thoughts on that.

What’s We Are Planning This Year

– We are planning on changing up session formats a little bit. Not giving alot of details at the moment, because it’s still being hammered out. But we do want to hit the reset button here in some aspects and not have a copy-paste of previous years or from other WordCamps.
– New workshop(s). We want to try adding another workshop or expanding on previous years. A beginner’s workshop in Miami is being planned.
– BuddyCamp Miami 2015 is being considered. John James Jacoby has called Miami the home of BuddyCamp so how can I disappoint him? (Answer: You don’t).
– We have a new venue this year (FIU) which means new locations for after parties and speaker/VIP dinners. No announcements on anything in that department yet.
– We have a particular focus this year on those who normally don’t automatically attend WordCamps, or even tech conferences. According to feedback, networking is one of our BIGGEST reasons people come to WordCamp Miami so we want to get people meeting and talking with others they haven’t met and would like to get to know. This means focusing on the youth, diversity in general, and developers that work outside of WordPress (PHP in general, Drupal, etc.)
– Speaking of the youth, we have alot in the works for teenagers and younger at WCMIA this year. I can’t wait to tell you more, and it goes beyond having a Workshop For Kids on a Sunday.
– This year, we are going to be hiring a professional company for our live streaming and taping of all sessions.
– The event as a whole is going to be more “real time interactive”. That’s about all I can say at the moment, but i’m quite excited about this in particular.
– Ice Cream… maybe? Thoughts?
– Speaker Collector Cards… maybe these are going out of style? We’ve done them for the past two years. Leave a comment if you have thoughts.
– I would like to see a serious discussion about the future of WordPress. It’s been an active topic especially over the last few months. An overall positive discussion with both good and negatives discussed, with people involved that the community respects.

I think it’s time WordCamps start to dive deeper into “heavier” development talks. It’s hard to do this at WordCamps generally speaking (unless it’s a WordCamp meant just for developers) because you have a wide audience of developers with various skill levels. I think this is, in part, why LoopConf is happening (and why I think that it will be a success and be a good example of a non-WordCamp conference).

I personally would love to see topics beyond beginner-level focused on the WordPress REST API (great post here covering the basics on that from PostStatus) or Backbone.

So we are looking at creating a special experience for developers at WordCamp Miami, and will soon be polling some specific individuals in the WordPress community.

Surveys before you open a call for speakers have been a staple for WordCamp Miami for years. Because WordCamps are primarily local community events, they help you focus on what particular subjects your potential audience would like to see.

This is our survey for WordCamp Miami 2015. Please give your thoughts, even if you are just thinking of attending WCMIA this year (and thanks to Aaron Jorbin for some guidance on this from a past reverse call for speakers he had done).

WordCamp Miami is just getting started, but we’ve made alot of announcements this week already. Sponsors and potential speakers are already reaching out. Our site will be updated visually later this month. We will be calling for speakers as early as next week, although if you are interested please read the information already on the site… and remember EVERYONE has a story and I would love to see new and interesting speakers this year.